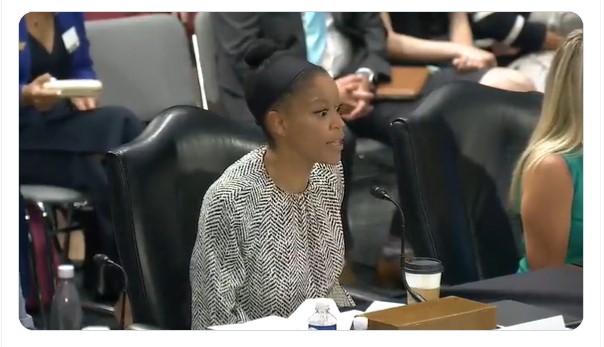 Sen. Josh Hawley (R-MO) challenged a liberal law professor who accused him of being “transphobic” Tuesday during a Senate committee hearing.

The intentionally ignorant leftist was triggered and responded because Hawley does not believe that men can get pregnant.

The University of California, Berkeley, law professor Khiara Bridges made repeated references to a “person with a capacity for pregnancy” instead of using the word “woman.”

At one point during questions from Sen. John Cornyn (R-Texas), Bridges used the convoluted and dehumanizing phrase for women five times within one minute to be inclusive of females who identify as males or another gender and can still have children.

Cornyn: "Do you think a baby delivered alive has value?"

Cornyn: "Do you think that a baby that is not yet born has value?"

Dem abortion witness: "I believe that a person with the capacity for pregnancy has value." pic.twitter.com/eYaOYumYSJ

Hawley asked whether Bridges was talking about women and whether abortion was solely a “women’s rights” issue if “men” can have abortions too.

“So this isn’t really a women’s rights issue,” Hawley said, choosing to pick a fight over the definition of the word “woman.”

“We can recognize that this impacts women while also recognizing that it impacts other groups; those things are not mutually exclusive, Senator Hawley,” Bridges sneered.

Hawley: Why are you using the term "person with a capacity for pregnancy" instead of "woman?"

Bridges: "Your line of questioning is transphobic and opens trans people to violence."

Hawley: "You're saying I'm opening up people to violence by saying women can have pregnancies?" pic.twitter.com/Yi46NlQCr0

When the senator followed up, Bridges grew wide-eyed and lectured Hawley about how his questions are a threat to transgender people.

“So, um, I want to recognize that your line of questioning is transphobic,” Bridges said, scoffing. “And it opens up trans people to violence by not recognizing [them].”

“Wow, you’re saying that I’m opening up people to violence by asking whether or not women are the folks who can have pregnancies?” Hawley asked with a sardonic tone.

“So, I want to note that one out of five transgender persons have attempted suicide,” Bridges stated for the record.

“Because of my line of questioning?” Hawley interrupted. “So we can’t talk about it?”

“Because denying that trans people exist and pretending not to know that they exist —” Bridges started before Hawley cut her off.

“I’m denying that trans people exist by asking you if you’re talking about women having pregnancies?” an incredulous Hawley asked.

“No, I don’t think men can get pregnant,” Hawley answered. And Bridges pounced.

“So you are denying that trans people exist, thank you,” she triumphantly exclaimed.

Bewildered, Hawley asked, “And that leads to violence? Is this how you run your classroom? Are students allowed to question you, or are they also treated like this where they’re told that they’re opening up people to violence by questioning?”

“Oh, we have a good time in my class. You should join. You might learn a lot,” the professor told Hawley.

“Wow, I would learn a lot. I’ve learned a lot just from this exchange,” he replied. “Extraordinary.”

6 months ago No Comments
Scroll to Top