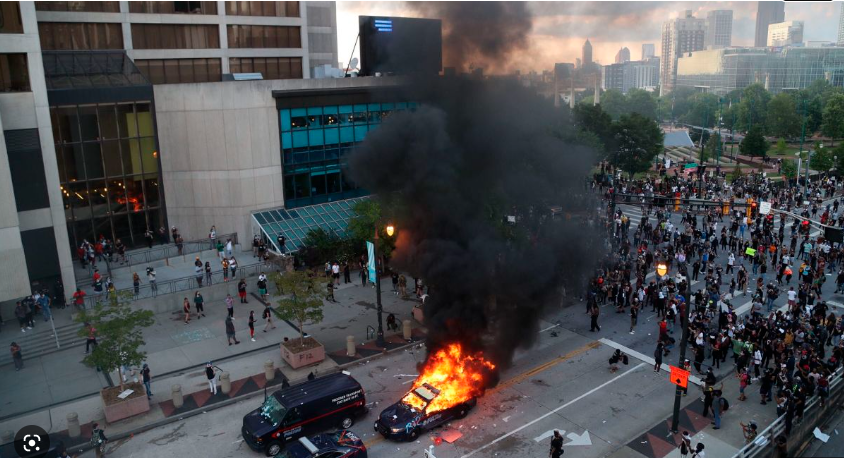 In what appears to have been a coordinated effort, Soros-funded radicals hit the streets in Atlanta, lighting a police car on fire and breaking business windows.

The protest reportedly began as a “mostly peaceful” demonstration in response to the death of 26-year-old activist Manuel Teran, who was killed during a police sweep on Wednesday “in what the Georgia Bureau of Investigation said was an exchange of gunfire with police that wounded a state trooper,” according to the Atlanta Journal-Constitution (AJC).

Hey @JoeBiden, it's time to ask your supporters to stop domestic terrorism. https://t.co/tUsjBzUDIK

The trooper remains unidentified and is reportedly in stable condition after being taken to a hospital for surgery.

Prior to the rioting, protesters chanted, “No justice, no peace, no killer police” and “Stop cop city,” which refers to the name of the Atlanta police training site.

“They also chanted ‘stop police terror,’ ‘free the activists,’ and ‘drop the charges,’ referring to how at least seven other people have been arrested and charged with domestic terrorism in connection with Wednesday’s law enforcement operation in the southern DeKalb woods,” noted the AJC.

One person attempted to also chant, “If they build it, we will burn it,” in reference to the city’s plans to “build a training center for police and firefighters within several acres of forested land in DeKalb County.”

7 months ago No Comments
Scroll to Top